If you work in IT, you’ve had a day like this. Let us set the scene:

It was a rainy, dreary morning in February. Alex, a system administrator at a large healthcare company, was awakened early by the constant bings and bongs from notifications on his phone. He rubbed his eyes and reached for the phone, which was, by this time, sending him alerts every second or two.

He took one look at his email and saw that his inbox was flooded with emails from the help desk system. Quickly skimming through all of the messages, it was clear that something was going on with remote access to the company’s published applications. Some end users were able to open their published applications, but complained that it took them forever to log in. Others couldn’t  open their apps at all.

Alex rushed to his laptop and browsed to the corporate gateway. He entered his credentials, but it took more than a minute to see the list of the published resources—far longer than it normally took for him to log in. “That’s weird”, he thought. He clicked on the icon to open his VDI machine. Error, it said.

“Huh? How can that be?” He was puzzled. He clicked the icon again and this time, the client started to process the session. Alex took a breath and relaxed a little.

After checking the gateway, the hypervisors and eventually the brokers, it became clear that the active remote connections to the corporate environment were skyrocketing. Traffic was up 70% from the week before, one of the gateways in the high availability  pair had crashed and become inactive, and brokers were also heavily taxed . As if that weren’t enough,  there was a misconfiguration in the brokers that the gateways should communicate with. “What a mess,” Alex muttered; I wish there were a better way to monitor these things.”

Introducing Scoutbees by ControlUp, a managed service that monitors the availability of your EUC published resources and notifies you in advance about any issue.

We created Scoutbees to give you a better way to proactively monitor the availability and responsiveness of your published resources. Because—as we all saw from Alex’s story—these business applications and workspaces are too important to wait until your users report problems. By the time that happens, it’s already too late.

Scoutbees is a managed service that monitors the availability of published resources running on Citrix Virtual Apps and Desktops, Citrix Cloud or VMware Horizon.

Scoutbees tests the availability of your resources, but it does so much more!  It also provides you with valuable insights about the health of connection flow & the environment (e.g. login times, network latency, brokers, etc) on the whole. 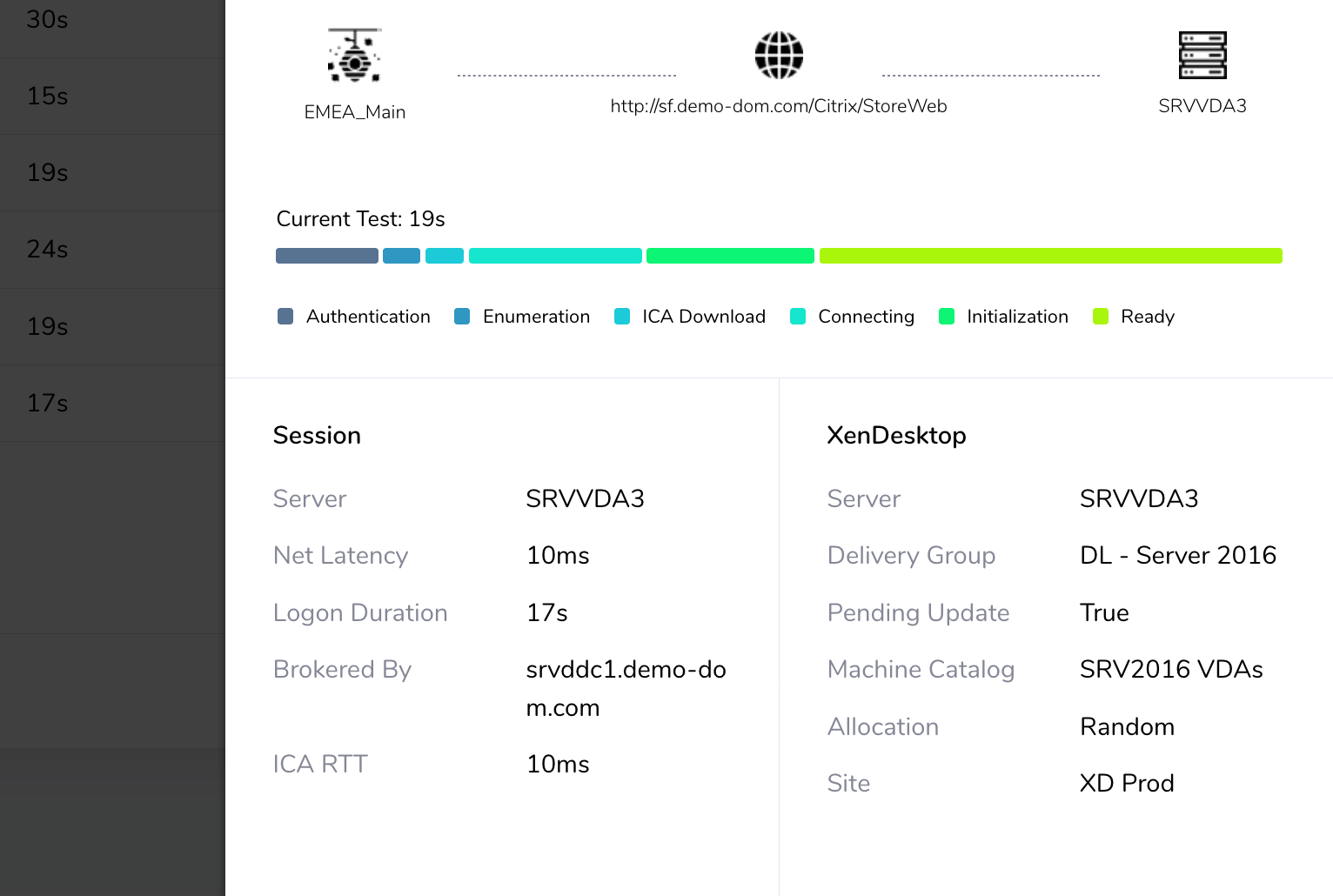 With Scoutbees, you can configure synthetic tests to run from a cloud-based location (managed by us) or from a custom location—such as branches, internal networks, or VPCs—by installing the Custom Hive component or test connections to internal resources (e.g. through internal Citrix Storefront). You can find more information about the Custom Hive feature here.

System administrators have a lot on their plates these days. Increased load on servers and apps accessed by countless numbers of remote desktops. They need to know their systems are healthy and delivering the best possible end-user experience. That’s why we put a lot of focus on simplicity, ease of use, and setup.
This is how easy it is to set up a cloud-based Scout:

Simply enter your gateway address and the credentials of the user you want to run the Scout with, select the relevant published resource, and choose the interval for your Scout to run its checks.

With the simple installation of the on-prem component (a Custom Hive, if needed) and the Scouts running inside a service process – there’s no need for interactive sessions. Woohoo! You can stop this auto-login madness – choose any machine in the remote branch (yes, even Linux) and run your Scouts from there. It’s just that easy.

This is just the beginning of Scoutbees, but we have big plans in the hive. Take Scoutbees out for a spin—start your free trial today! And stay tuned for more buzz soon.

Try it out at https://scoutbees.io